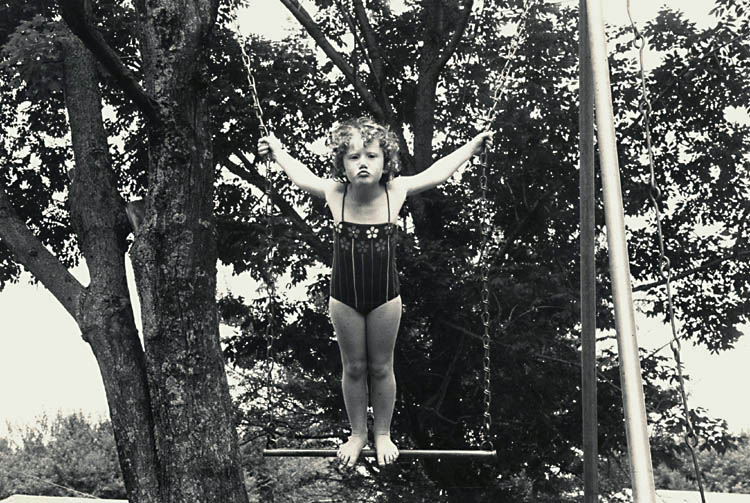 Caroline on Swing
1978/1978
Silver print
unmounted
9-1/16 x 13-1/2 in. (230 x 343 mm)
Signed on recto in lower right margin in black ink. Titled and dated on verso. Provenance: Photographer. Born in the U.K., Susan McCartney has been taking pictures since the age of 12 and studied fine art and graphic design at the Hammersmith College of Art in London and the Cooper Union in New York. She refined her photography and vision at master classes given by legends Richard Avedon, Alexey Brodovitch, Harold Kreiger, Walter Rosenblum, Melvin Sokolsky and Henry Wolf. She has a degree in photography from the School of Visual Arts. Early in her career she worked in the international corps of guides at the United Nations headquarters and at various travel and art jobs until becoming a professional photographer. McCartney has shot assignments in the U.S. and overseas for a diverse clientele including British Airways, the British Tourist Authority, Caravan Tours, Club Europa, the Irish Tourist Board, Lan Chile Airlines, the Economist, Glamour, House and Garden, Time, Travel and Leisure, the US Army, Varig Airlines and Warner Brothers Records. Her photos have been featured in Time, The Economist, Glamour, The New York Times, Life, Shutterbug and Woman's Day, among many other publications. She has shown and talked about her work at the Smithsonian Institute as well as on public television and taught photography at Cooper Union and the School of Visual Arts. Her photos have been published in books, magazines and advertising around the world, and she has received awards from the Art Director's Club of New York and Communication Arts magazine. McCartney is the author of several popular books on photography, including "Mastering the Basics of Photography", "Photographic Lighting Simplified", "Mastering Flash Photography", "Travel Photography", "Nature and Wildlife Photography" and "How to Shoot Great Travel Photos". She is currently working on a digital photography book. She currently lives and works in New York City.
Price: $1,500  Sale: $1,050 (ref. 8963)